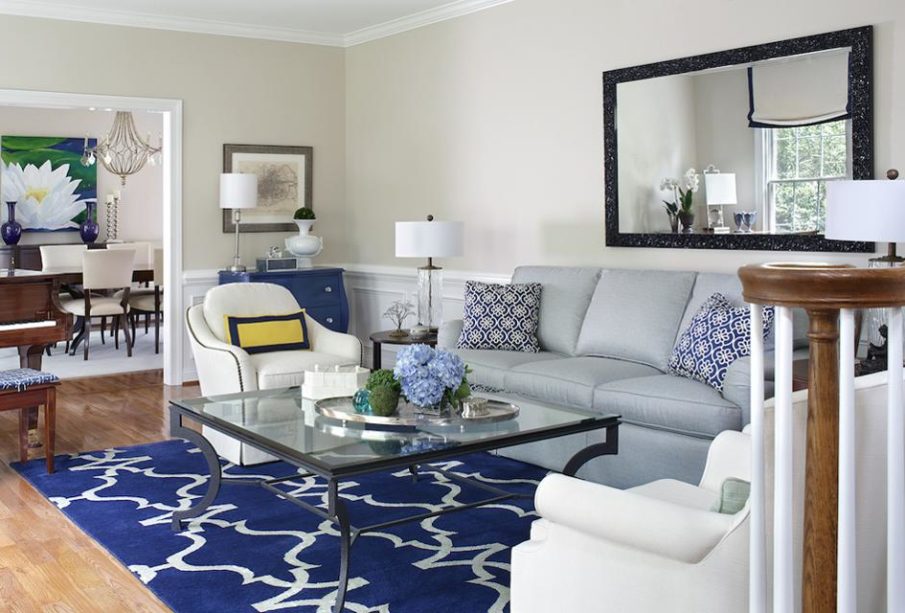 While hiring an interior designer has been the standard for years, and the DIY craze isn’t slowing down any time soon, there might be a fine line that encompasses a little bit of both. Donna Hoffman aka The Interior Design Advocate is empowering people to learn about design concepts and take control of their own spaces through online coaching and courses.

Hoffman is a luxury interior designer from the Philadelphia area who saw a need to fill several years ago when she kept encountering potential clients that wanted to work with her, but didn’t have the budget to do so. “They would feel very disappointed. It would break my heart. I felt I was letting people down,” she says.

Around the same time, Hoffman read a survey on a home improvement website that asked users if they were happy with their home’s décor. “Ninety-eight percent of respondents said no,” shares Hoffman, “And a little less than half responded they weren’t even on the right path to having what they want.”

She also saw the rise of DIY bloggers and influencers. “I felt the design lover and the design enthusiast was getting screwed by the total DIY machine. Not intentionally, but really deceived by it,” she explains. “There is this idea that you can just gather Pinterest pictures, put together idea books on Houzz and boom, you should be able to put together a fabulous looking home on any budget and if you can’t, there’s something wrong with you.”

Eliminating Bias In Hiring Requires A Shift In Perception

Hoffman wanted to do something to help and says she has always been a natural teacher. She launched her first course in 2016 and has since created two more. The Decorating Genius System is her signature course consisting of approximately 2.5 hours of video and corresponding worksheets. The information is presented simply and easily as a slide show with photos, voiceovers and video from Hoffman. There are also worksheets for note taking and brainstorming.

The genius of the course (no pun intended) is that instead of a simple Pinterest board of ideas, it gives a true roadmap on how to tackle any design project, whether it’s a room or an entire home. The current price is $299, which is a fraction of the cost it would be to hire an interior designer and more comparable to using virtual services.

Hoffman’s second course, Design CPR, which stands for Creating Perfect Rooms, is priced at $399 and teaches users how to properly accessorize a space. It covers everything from pillows, styling other accessories, lighting, budgeting, etc.

The third course is a “graduate” level program for those who have already taken DGS. It is a little bit different and has an online meet-up component where students can access Donna herself and screen share to mastermind together.

A fourth course, which is focused entirely on window treatments will be available in the fall.

The difference between Hoffman and DIY videos, blogs, etc. is that she isn’t imposing her personal style or touting the value of shiplap, for example. Pinterest and Instagram are great ways to discover specific styles and pieces, but Hoffman’s courses are about what to do next. As her client Jen O explains in a testimonial, “I finally understand how to figure out my style and to stop asking my friends and family their opinions all the time!”

It’s not as if the information Hoffman gives in the course isn’t anything that can’t be found elsewhere. There are a seemingly endless amount of webpages and articles that cover the same topics. But it’s how she presents the information that’s different. She teaches the art of tackling a project in the most efficient way possible. It’s also worth noting that the simple user experience can appeal to everyone from Generation Z to seniors.

Each course also provides access to Hoffman’s private Facebook groups. The largest one is close to 1,400 members. Unlike many private Facebook groups, Hoffman’s have a true community spirt. Users are supportive and delightfully civil. Members post about their design dilemmas from paint colors to ceiling fans, furniture and large construction projects. Hoffman sees these groups as one of the most important parts of the process because it’s interactive. “You can’t learn how to design by reading a blog post. I’m also a blogger. But what can you learn from 300-500 words?”

But one thing that Hoffman’s courses do not do is train people to become interior designers themselves. She says that the difference between what she does and DIY is that she teaches strategy. In fact, while most of her students go on to decorate their homes themselves, many do not, but they use the knowledge they’ve gained to better choose and work with their own interior designers.

As for what’s next, Hoffman is holding a live event called The Design Diva Conference in September where her community can meet in person. Perhaps she’s even starting new design movement, DIWO (do it with others).